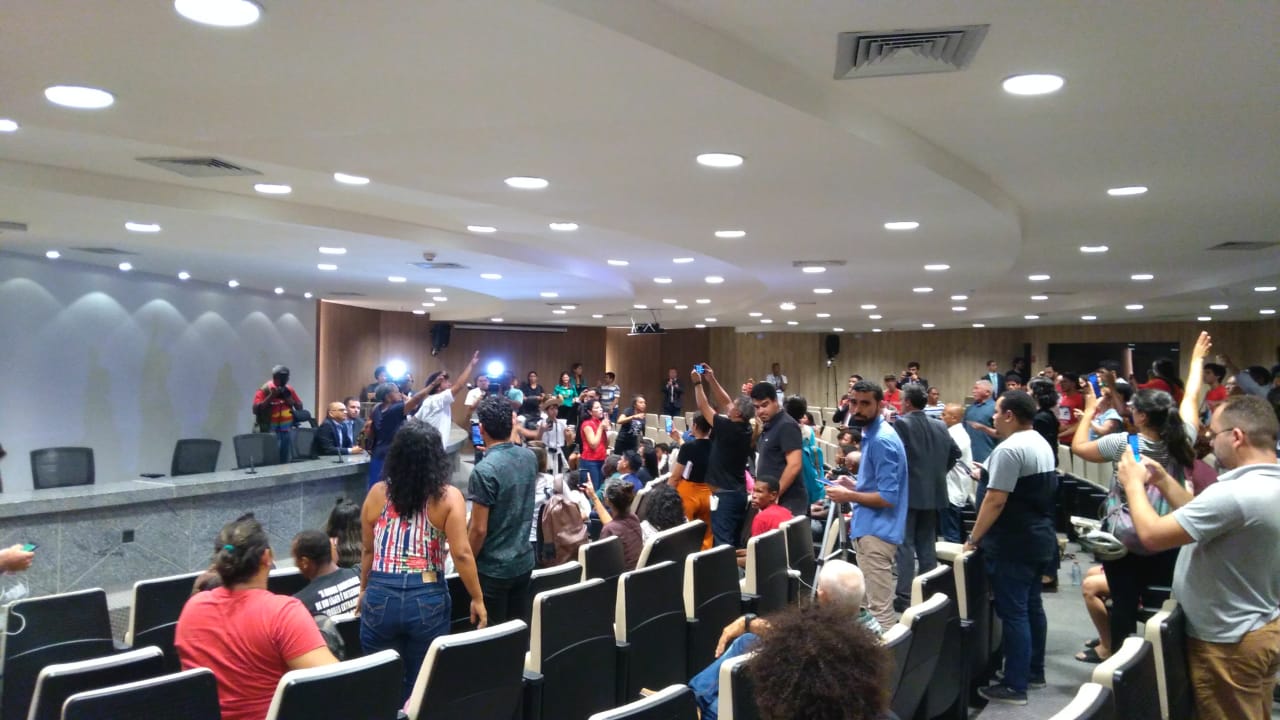 During a press conference on Tuesday (13), at 9 o’clock, held at the Brazilian Bar Association (OAB), sectional Maranhão, in the capital São Luís, were reported violent police actions that expelled supporters and residents of the Cajueiro Community who were protesting in front of the Palácio dos Leões on the night of Monday, 12th. They were protesting against the eviction that destroyed 17 houses and affected about 80 families. Two people have been detained, one during the eviction and one at the protest outside the government Palace. Later they were released.

The press conference, according to the Pastoral Land Commission in Maranhão (CPT-MA), one of the entities that has been accompanying and supporting the families of the Cajueiro Community for years, presented complaints about the acts of violence during the eviction process, which began on Monday, 12th, and the violent expulsion of about 30 protesters in defense of the community that were camped outside the Palace of Lions, home of the state government.

"It was violence in all spaces, and many reports of police truculence and the silence of the state government," reported a Pastoral agent who attended the press conference.

The eviction process of the Cajueiro Community, located in the rural area of São Luís (MA), occurred amid a series of arbitrariness denounced by people from the community and also by civil society organizations. About two hundred military police men were mobilized to evict 80 families from the area, in order to build a private port of the company WPR São Luís Gestão de Portos e Terminais (formerly known as TUP Porto São Luís S / A).

Rafael Silva, president of the Maranhão OAB Human Rights Commission and CPT lawyer, attended the press conference and denounced the strong police crackdown on protesters last night. He points out that the state secretary of public security, himself, coordinated the military action. “Last night, around midnight, residents of the Cajueiro Community who had been evicted in a violent and irregular repossession action were sleeping on the floor, in front of the Palácio dos Leões, including old people, and were woken up with tear gas grenade and rubber bullets in an operation of the Military Police Shock Troop, coordinated personally by the State Secretary of Public Security, Jefferson Portela, ordered by the Governor Flávio Dino, as the operation was at the door of the Palace of Lions. We, lawyers, could not access people because it was considered to be a threat to the presence of lawyers that night” he said.

The Government of Maranhão, at 00h44 of Tuesday (13), released a note about the episode reported above and stated that “in the face of risks and threats of invasion, on Monday night (12), to the Palácio dos Leões, protected as a heritage site, the Public Security Bureau and the Military Cabinet requested the peaceful eviction of the area. Unfortunately, it took force to enforce the law.”

During the police action, several people were injured (as shown in the image below) and have taken or will go to take the forensic medical examination. 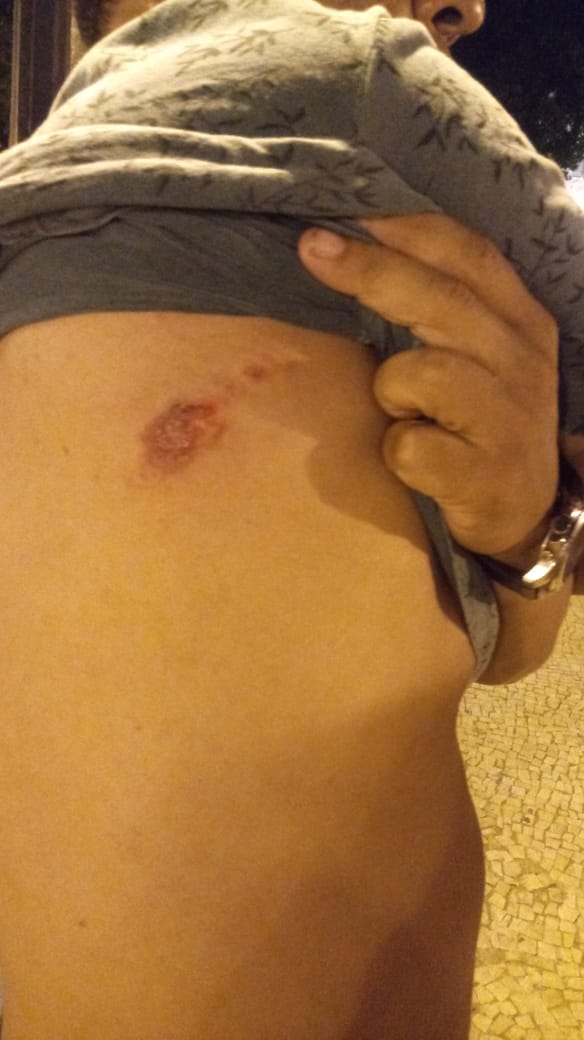 Tuesday (13) in the morning, during the community press conference, the people were informed that members of the State Government would also hold a press conference at 11 am. Members and supporters of the Cajueiro went to the Palacio Henrique de La Roque, administrative seat of the Flávio Dino government (PCdoB), who did not attend the event. The conference was attended by the Secretaries of Public Security, Human Rights and Industry and Commerce. The press conference convened by the government became of the people, who took turns in the microphone to denounce all the violence suffered by the Cajueiro Community over years of conflicts and also in relation to the eviction.

About the press conference on Tuesday, Clovis Amorim, a member of the Cajueiro Community, says that to dismantle the members of the Cajueiro and its supporters “the human rights secretary marked here at the government headquarters [also a press conference], and we all came here, but he ran away because they don't want to tell the truth to society. And we came here to say that they are lying” he explained.

Clovis Amorim recalls that on Monday, while one group resisted eviction in rural São Luís, another was in the capital, in front of the Palácio dos Leões, to protest the action. He was in the capital of Maranhão and reports what happened: “We arrived on Sunday and spent all Monday. And today we were surprised by the Police Shock Troop, which was sent by the secretary of Public Security. They beat a lot of people, threw a bomb, rubber bullets and drove us out. [The police] was sent by the secretary himself, Jefferson Portela.”

“It was a night of total non-compliance with the constitutional order and the right to peaceful free expression. They evicted people from the Palace door, and now people are inside the Palace”- Rafael Silva, President of the Human Rights Commission of OAB/MA.

Neighbor of Cajueiro and also impacted by the port venture, Dona Máxima Pires tells how the eviction of the territory affects the people's lives. “We are from traditional communities, which long before these companies set up in the region, we already lived there. In these last two days in the Cajueiro there have been various arbitrariness. These [Cajueiro] families are fishermen, the mangrove for us is very representative, our livelihood, and we need it, our identity, our sense of belonging. As a neighboring resident, we are twinned and worried because if they arrived in Cajueiro, they could reach our community [Rio dos Cachorros], because the State Government, in a long time, wanted to transform our area into an industrial area and remove about 12 traditional communities”.

On Twitter, since Monday the conflict with the Cajueiro Community and the name of Governor Flávio Dino were among the trending topics of Twitter, in Brazil. The tone of criticism of repossession dominates the comments: “While many applaud Governor Flávio Dino's deeds, others cry at the door of the Palácio dos Leões asking to their lives, their homes and their culture not be destroyed,” one user posted.

In a Public Note, the OAB, the Public Defender Agency of the State and the Union (DPE and DPU) affirm that “the illegality existing in the conduct of said reintegration is noticeable, even though it is subject to compliance with a court order, given that there was no formal communication of the compliance with the judicial decision by the Public Security Bureau of the State of Maranhão, to those harmed at least 48 hours in advance, which should include the exact date and time when the eviction would be performed. In addition, no preparatory meeting was held with the Community for the removal of their belongings, which would avoid the conflicts witnessed today”.

Still according to the agencies, compliance with the court order “is not based on compliance with the Manual of National Guidelines for Execution of Warrants for the Maintenance and Reinstatement of Collective Possession (Decree 31.048/2015). Therefore, the DPE, the DPU and the OAB repudiate the arbitrariness of conducting the reintegration of possession of the Cajueiro area, in view of the disrespect for human dignity, the basic principle of the Constitution of the Federative Republic of Brazil. DPE, DPU and OAB also state that they found, at the time of the reintegration, “that the three probation officers did not know which houses would be torn down and which people would be impacted by the decision. In practical terms, the scope of the measure was unilaterally determined by the company. ”

For the Maranhão Society of Human Rights (SMDH), it is amazing how a private enterprise, “with so many questions, achieves the formal prerequisites of environmental installation imposing itself on a traditional territory, which, besides a state settlement, is circumscribed in an area of ​​eventual creation of extractive reserve of the Island of São Luís'”.

The OAB and the Public Defender's Agency of the State and the Union also note that they will take all appropriate procedural and administrative measures “against the arbitrary manner of compliance with the court order and in defense of the transfer of the injured people to another place to establish residence”. 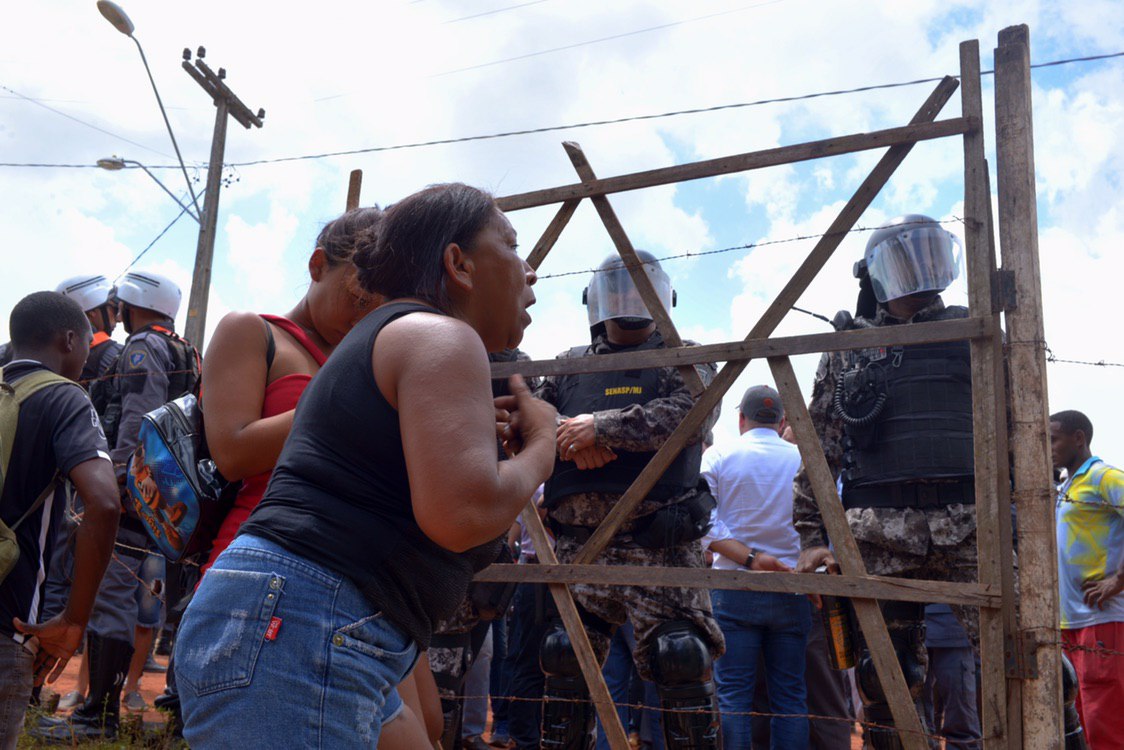 The eviction of the Cajueiro Community began on Monday, 12. Credit: Ingrid Barros

At CPT Dom Tomás Balduino Documentation Center there are records of conflicts with the Cajueiro Community since 1998. Initially, at that time, the state of Maranhão, through the Maranhão Land Institute (ITERMA), transferred the useful domain of the referred lands, in condominium regime for the residents of Cajueiro, in a size of approximately 610,000 hectares, according to the provisions of state law Nº 3.840/77, for the purpose of implementing a settlement project. The territory focused on the Gleba Tibiri-Pedrinhas, owned by the Federal Union and bound to the state of Maranhão.

Already in 2004 began the saga of the Cajueiro Community in order to remain in that territory, which years before almost became a settlement project. At that moment news started to circulate among the people, about the intention of installing a steel pole in the region, which should initially occupy the area of ​​2,471.71 hectares, and countless families would need to be evicted from 12 villages: Vila Maranhão, Cajueiro, Rio dos Cachorros, Taim, Porto Grande, Limoeiro, Anandiba, São Benedito, Vila Conceição, Parnauaçu Madureira e Camboa dos Frades. The project ran into strong opposition from traditional peoples and social groups, supported also by social organizations and movements.

Decree Nº 20.727, of August 23, 2004, reformulated the area of ​​the Industrial District of São Luís - DISAL, measuring 18,861.04 hectares, which strengthened the process of installation of large enterprises in the locality.

The then Governor Roseana Sarney, by Decree Nº 27,291 of April 5, 2011, declared the area of ​​public utility, for the purposes of total expropriation, in favor of Suzano Papel e Celulose, in the Area Strip destined to energy and transport infrastructure, in the São Luís Industrial District. The company intended to build a port from which the cellulose produced in the Maranhão and Piauí mills would be exported.

Where the community lives, there was the project to create an Extractive Reserve (RESEX), but the state of Maranhão objected that it would create obstacles to economic development and that the area would be inserted in the Industrial District, strategic for logistics around Itaqui Port and other existing projects there.

In 2014, according to local press, the company WPR São Luís Gestão de Portos e Terminais Ltda, through the environmental consultancy Urbaniza Engenharia, will be presented as entrepreneurial owner of the Cajueiro Community. And in the same period, members of the Cajueiro denounce that they have suffered serious acts of violence, fraud and intimidation. Community members even denounce the action of an armed militia in the region to threaten and expel the community from the scene.

Year after year, the Cajueiro Community faced numerous conflicts and became one of the most emblematic cases of Maranhão, which caused several people to leave the area. Now history gains another chapter with the eviction of families and the destruction of the possessions gained over a lifetime.

Public letter in defense of the Community of Cajueiro