CPT partial data: Violence against occupation and land tenure, murders of landless people and deaths as a result of conflicts soar in 2021

The data referring to "Violence against Land Occupation and Land Tenure" show us that the "Destruction of Home", "Destruction of Belongings", "Expulsion", "Land grabbing", "gunslinger action" and "Impediment of access to the Communal Use Area" reached a number of families, affected until 31st of August 2021, higher than that verified for the whole year of 2020.
418 territories in the country were targeted by this type of violence in the first 8 months of 2021. 28% of them are indigenous territories. Between January and November 2021, 26 murders were recorded in conflicts in rural areas. A 30% increase over the entire previous year, when 20 murders [1] were registered.
The number of "landless people murdered" rose from 2 in 2020, to 6, in 2021. "Deaths as a result of conflicts" soared, reaching an increase of 1,044%, from 09, in the entire year of 2020, to 103, until then registered. Of these 103 deaths, 101 were Yanomami indigenous people.

The Documentation Center of the Comissão Pastoral da Terra (CPT) - Dom Tomás Balduino (Cedoc-CPT) presents, on this Human Rights Day (10), the Partial Data of Conflicts in rural areas, in Brazil, for the period from January 1st to August 31, 2021. With the exception of the categories of "murders" and "deaths as a result of conflict", referring to "violence against the person", which are updated to date.

In 2021, 418 territories suffered "Violence against Land Occupation and Land Tenure". Of these, 28% are indigenous territories; 23% quilombolas; 14% are squatters' territories; 13% are landless territories, among others. "Home destruction" increased by 94%, "destruction of belongings" 104%, "expulsion" 153%, "land grabbing" 113%, "gunslinger action" 118% and "Impediment of access to the Communal Use Area" increased by 1,057%. All these data, registered between January and August of this year, already surpass the data for the whole year of 2020. 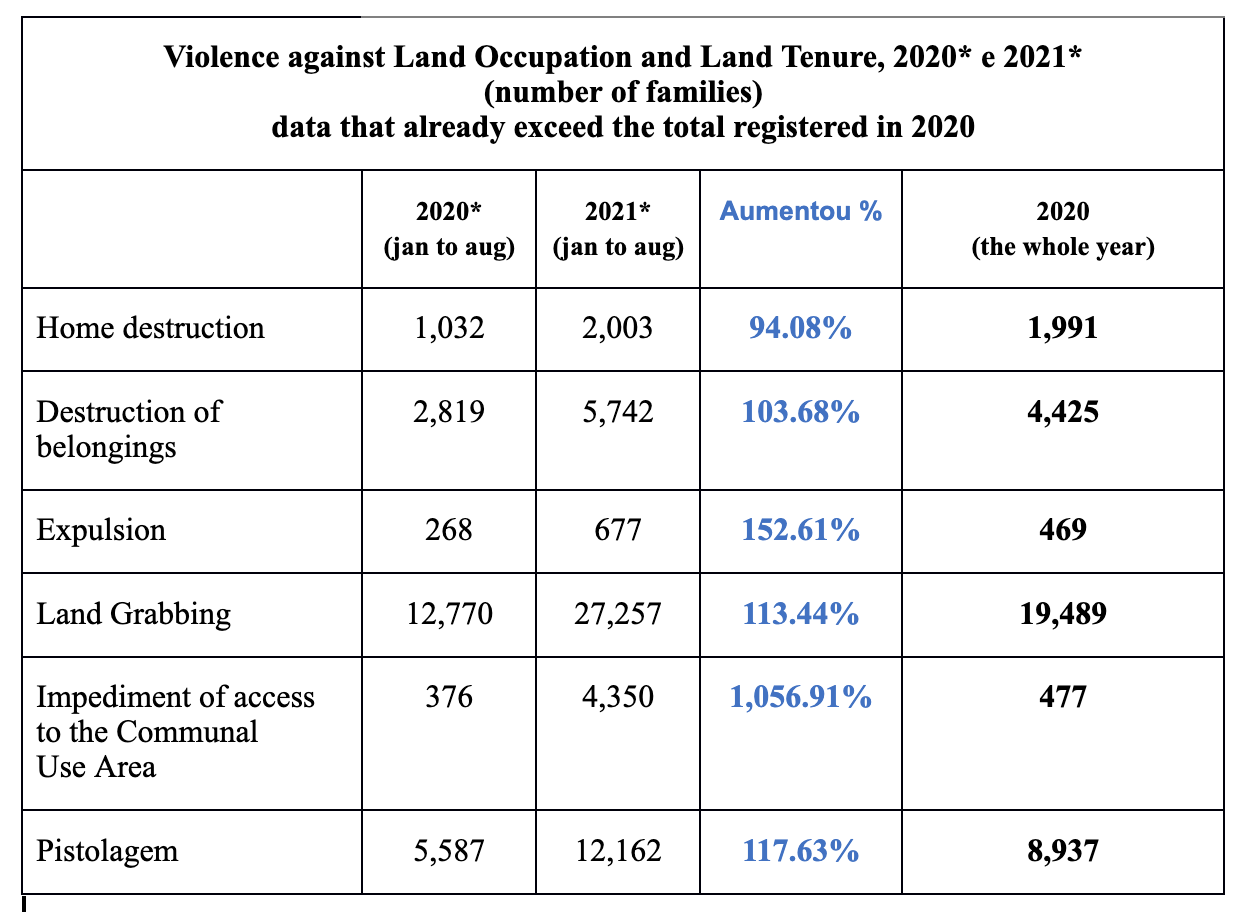 Violence against the Person: the murder of landless people triples and deaths as a result of conflicts soar

In 2021, 26 murders related to conflicts in rural areas have been registered so far. Compared to the whole year of 2020, it already represents a 30% increase in murders in rural areas in Brazil. 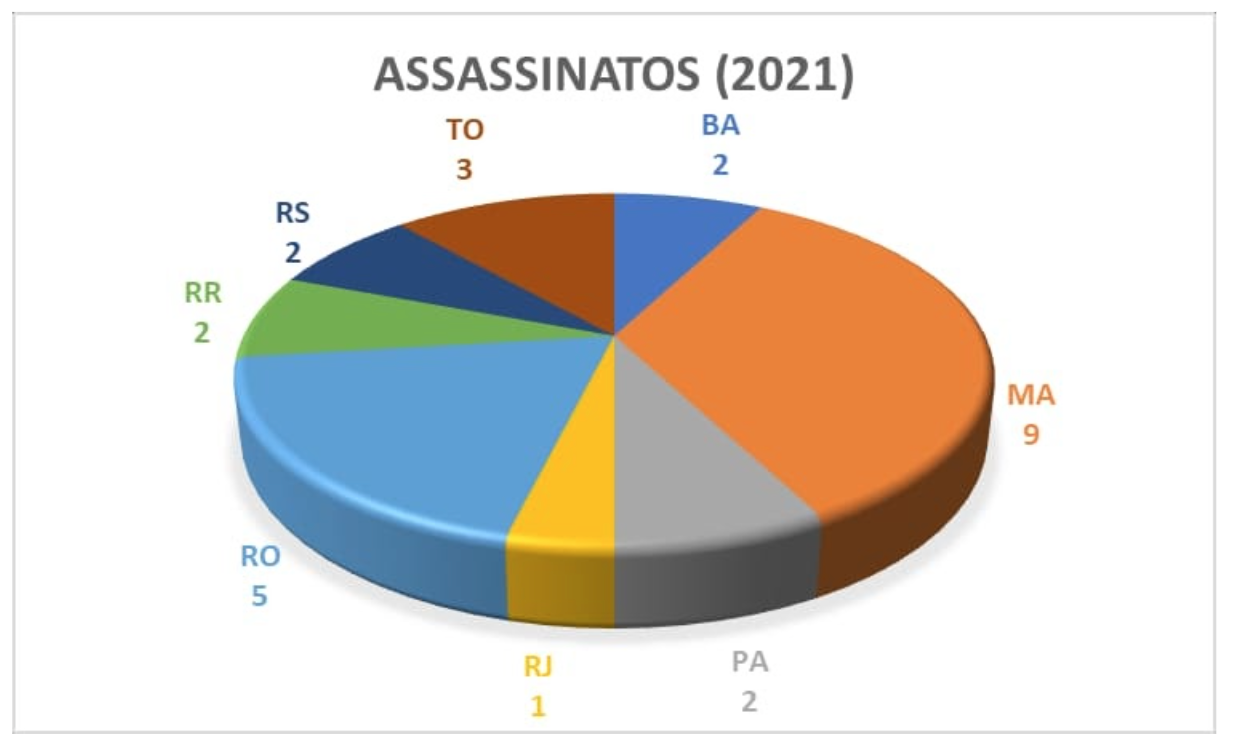 Of the 26 murder victims, 8 were indigenous, 6 landless, 3 squatters, 3 quilombolas, 2 settlers, 2 small landowners and 2 babassu coconut breakers. In relation to 2020, the number of murdered indigenous and quilombolas remained the same. The number regarding the landless people tripled, from 2, in 2020, to 6, in 2021. All quilombolas murdered in 2021 (3) were from Maranhão, the brazilian state with the highest number of murders in the year (9), around one third of the total registered so far.

All 6 murdered landless workers were killed in the Amazon Forest, of which 5 were killed in Rondônia. All members of the Liga dos Camponeses Pobres (LCP). 3 of them were killed in a massacre on August 13 [2], by the Special Operations Battalion (BOPE) of the Rondônia Military Police and by the National Security Force, at Ademar Ferreira Camp, in Nova Mutum, Porto Velho district. This was the only massacre recorded by the CPT so far, in 2021. The conflict in the region remains very tense [3]. The number of murdered squatters increased from 1 in 2020 to 3 in 2021, and of settlers from 1 in 2020 to 2 in 2021. 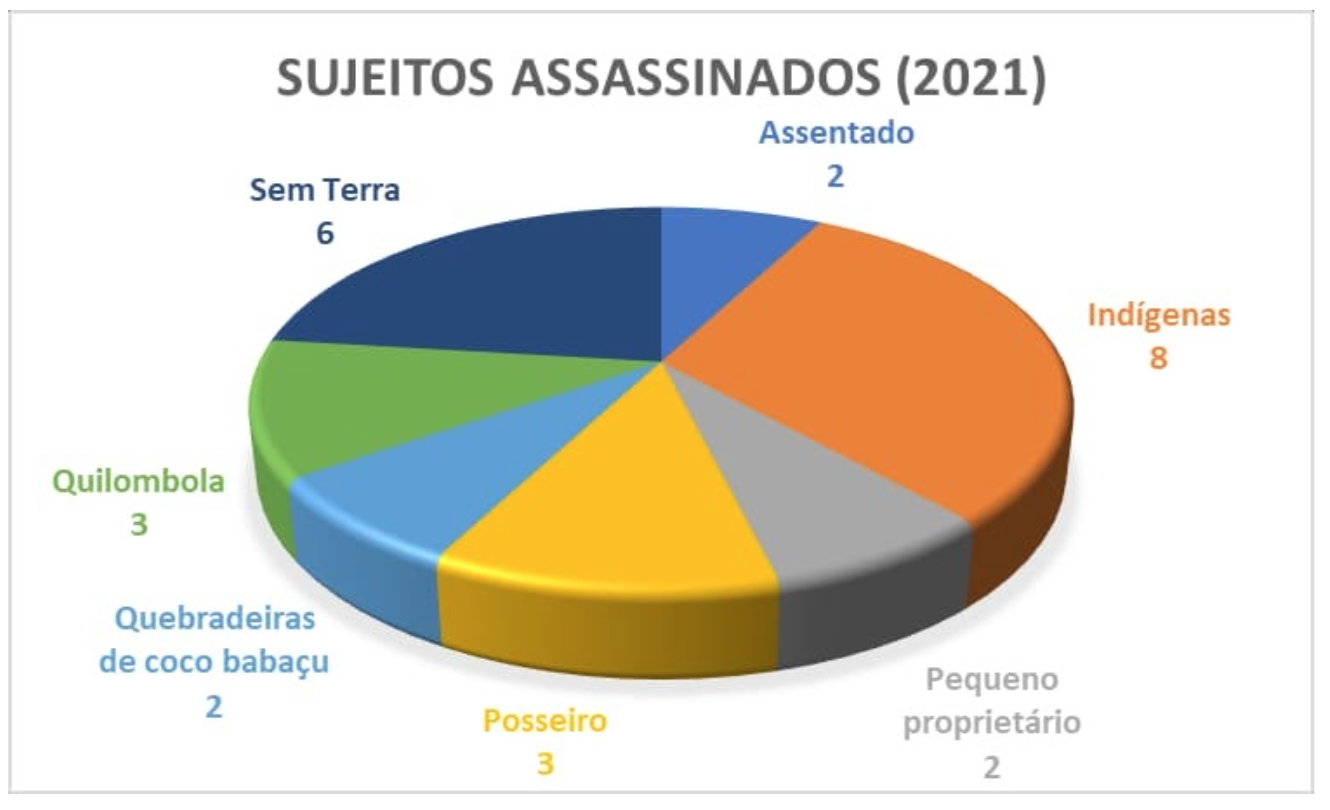 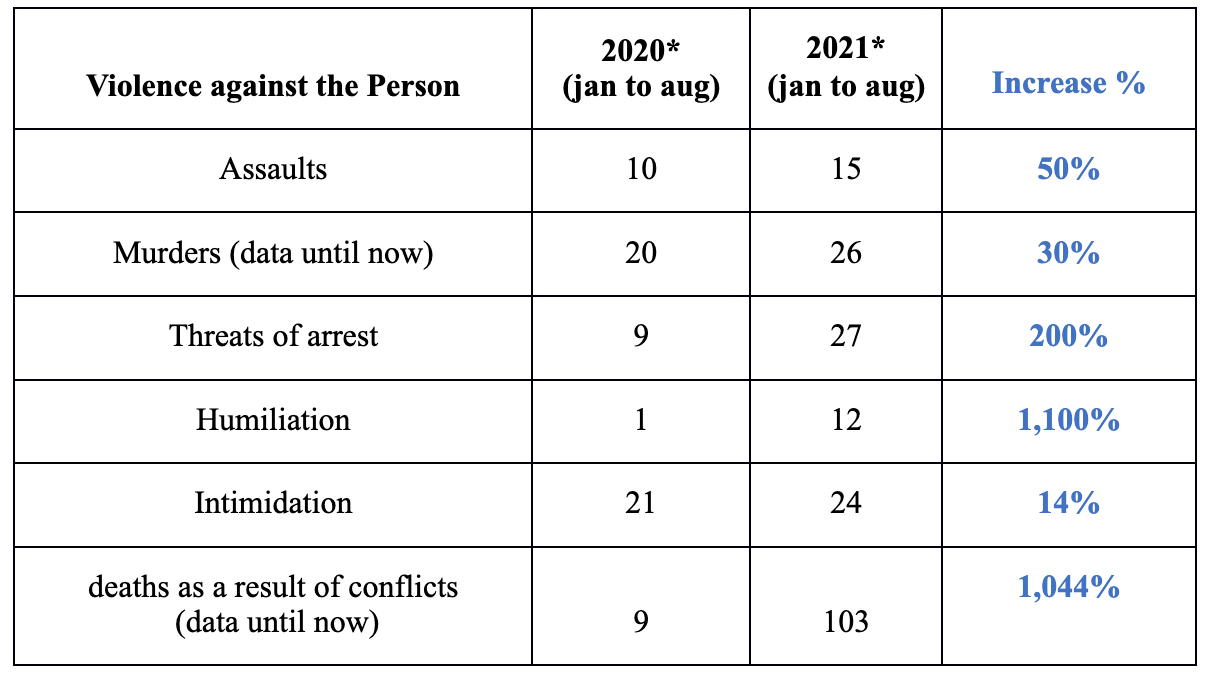 Of the 103 deaths as a result of conflicts recorded so far in 2021, 101 were Yanomami indigenous people. From this, it is not possible to extract, according to the sources, the exact number of children, women and men who died as a result of conflicts in rural areas. This is due to the fact that the research source did not provide such specified information. But, of the 101 deaths, we have information that at least 45 were children. Most of this data was presented at the II Forum of Yanomami and Ye’Kwuana Leadership, held between 4 and 7 September 2021, in the region of Tabalascada, municipality of Cantá, in the north of the state of Roraima. There is even great difficulty in establishing the exact dates of the occurrence of these deaths.

During 2021, we monitored several invasions by mine workers into Yanomami territory, resulting in murders, aggressions, threats, threats to the territory, water contamination, deforestation, in addition to being vectors of various diseases, including Covid-19. We also witnessed children being sucked by dredges [4] as well as children dying to drown in an attempt to escape the shots fired by criminals [5]. The lack of public health and nutrition policies exposed the high rate of malnutrition that affects Yanomami children, often fatally, and also exposed how diseases, such as malaria, leishmaniasis and pneumonia, also decimate these indigenous people in our country.

The Demonstrations of Struggle that addressed the Indigenous Issue had an increase of 146% compared to 2020. From January to August 2020, 46 demonstrations were registered, whereas, in the same period of 2021, 113 Demonstrations of Struggle were registered under this theme. Here we highlight the "Acampamento Terra Livre", the "Levante pela Terra" and the "Acampamento Luta pela Vida", all held in Brasília by indigenous peoples. The camps also had national adhesion, with demonstrations and acts carried out in indigenous territories. Resistance to the judgment of the "Temporal Mark" was the main agenda for the actions of the indigenous peoples. The approval of the thesis would disrespect the fundamental right of indigenous peoples, which is materialized in the original right over the lands they traditionally occupy. 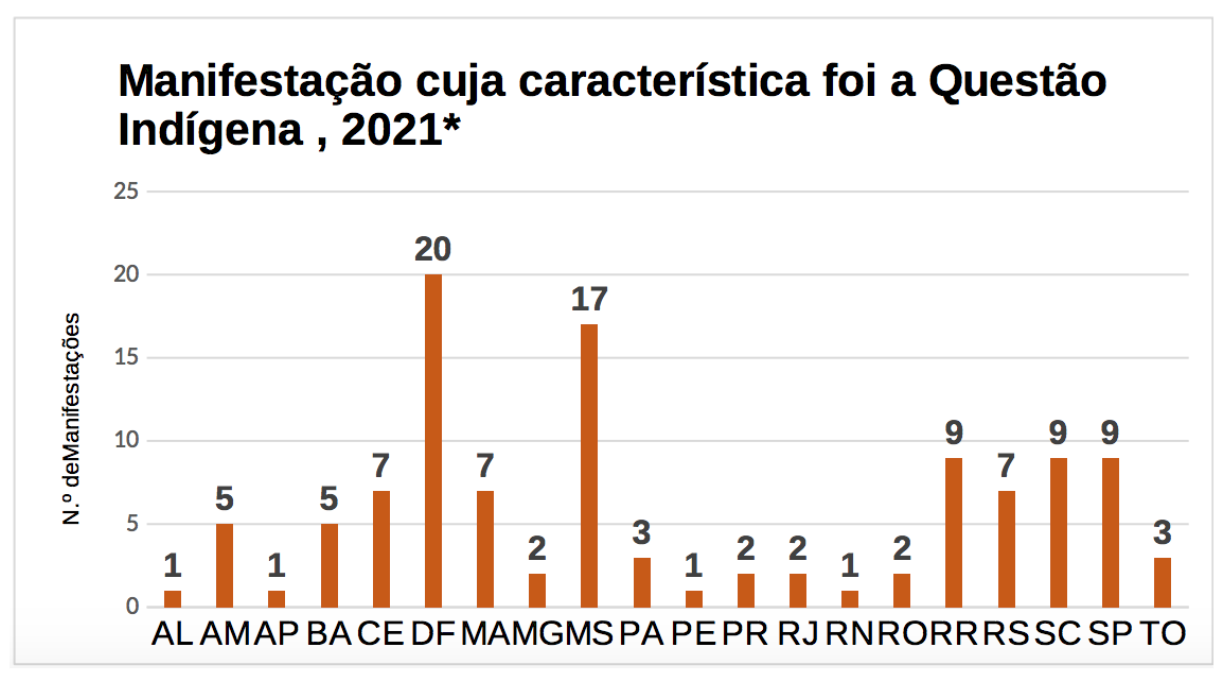 [1] In the publication “Conflitos no Campo Brasil 2020”, released in May this year, the table of murders brought a total of 18 murders. After the publication was released, the CPT Cedoc received information on 2 more murders in the state of Amazonas, which were updated in the database and, therefore, here we bring a total of 20 murders in rural conflicts in the year 2020.