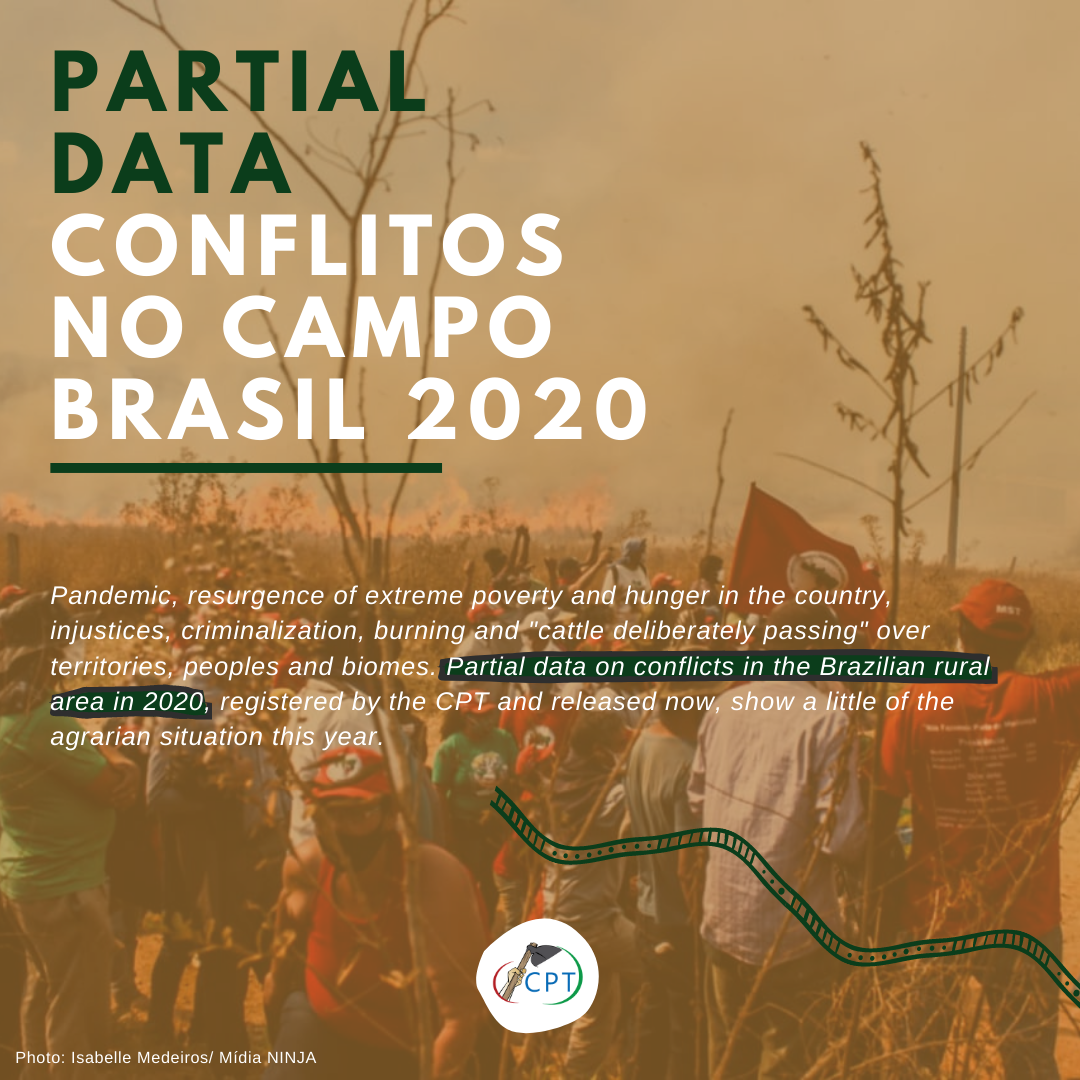 Pandemic, resurgence of extreme poverty and hunger in the country, injustices, criminalization, burning and "cattle deliberately passing" over territories, peoples and biomes. Partial data on conflicts in the Brazilian rural area in 2020, registered by the CPT and released now, show a little of the agrarian situation this year.

In addition to the disastrous political situation that affects everyone in Brazil, the year 2020 began with a major global impact, a pandemic of proportions not yet seen in contemporary times. The new Coronavirus has disrupted the capitalist model imposed on society and has eroded, even more, the countries that currently see their democracy weakened.

For the peoples of land, waters and forests, who have been set apart since the beginning of this genocidal government, this year was yet another challenge among the many they face, challenges that were counterbalanced by the principles that their ancestry and care for common home they have always been taught: we are all one and the land, if well cared for, will provide. Thus, the greatest demonstration of solidarity and altruism in the face of the challenges of the coronavirus came from the rural area.

In 2020, the CPT Documentation Center - Dom Tomás Balduino (Cedoc) registered several donations as Demonstrations of Struggle, understanding that these were a form of resistance, related to historical demands, such as land reform, food sovereignty, among others. These new forms of demonstrations, based on solidarity, through the donation of food, meals and hygiene items, in actions coordinated mainly by peasant movements and social organizations, also often had the support of workers' unions and federations.

By the end of November, the Documentation Center registered 181 such actions, totaling 823.39 tons of donated food. The Brazilian states that undertook the most food donation actions were Alagoas (28), Paraná (24), Rio Grande do Sul (24), Pernambuco (22) and Santa Catarina (18). In these actions, the Movements of Landless Workers (MST) were present in 110, the CPT in 40 and the Movements of People Affected by Dams (MAB) in 14. 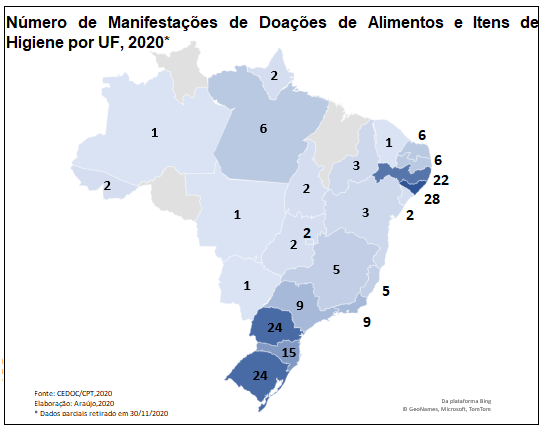 With government approval, cattle and fire devastated the biomes

In addition to the pandemic, which already pointed out how disastrous this year would be in various dimensions, in Brazil, people still had to deal with other problems that were also devastating. We saw our biomes being consumed by the flames, while the environmental regulatory bodies were dismantled. The environment minister, Ricardo Salles, smiling, watched everything while "letting the cattle pass." A very appropriate metaphor for liberating the practice of crimes to the full extent of Brazilian nature.

The year is not yet over and the number of fires in the Amazon has already surpassed the total reached in the entire year of 2019. As of October 22, 89,602 hot spots in the biome were registered, surpassing the record of 89,176 of the previous year, according to the National Institute for Space Research (INPE). In the Cerrado there were about 56 thousand fire spots in the same period. We saw the Pantanal, one of the largest ecological sanctuaries in the country, with rich fauna and flora, being swallowed by fire. Volunteers, people outraged by the situation, were running out of time trying to save what was left and the injured animals.

In addition, abandoned by Funai, 60% of indigenous lands were devastated by more than 100,000 fires. The state of Mato Grosso was the most affected from the beginning of the year to the end of October, with a 1.300% increase in fires in traditional territories, compared to 2019. Even joining efforts, indigenous people complained about the lack of structure to fight the fire, while other groups accused Funai and the government of omission*.

Violence against occupation and possession

Among the partial conflict data released today, the CPT Documentation Center registered, in 2020, 1,083 occurrences of violence against occupation and possession, which affected 130,137 families. In 2019 absolute data, 1,254 occurrences were recorded with 144,742 families involved.

In 2019, the CPT had registered, in absolute numbers, 09 invasions involving 39,697 families. This shows an increase of almost 1,880% in the number of occurrences, and we are still talking about partial data. Regarding the number of families victims of this type of violence, there was an increase of about 40%.

Among categories that suffered this violence in 2020, 54.5% of the total were indigenous. 11.8% were from quilombola families and 11.2% from squatters, as can be seen in the graph below: 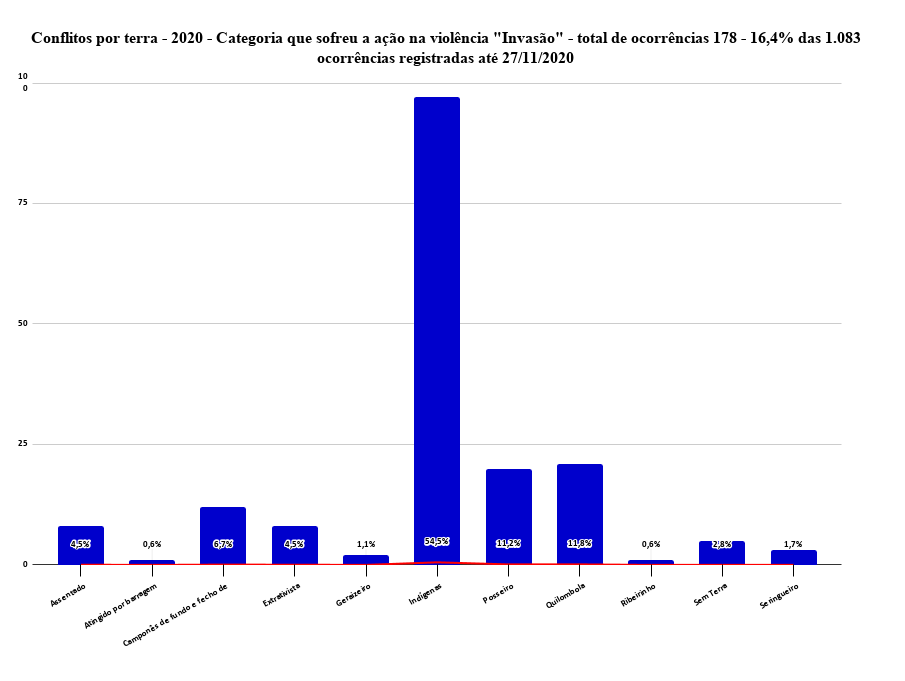 Violence against the person

In 2020, the CPT recorded 18 murders in conflicts in rural areas. The Dom Tomás Balduíno Documentation Center is still waiting for information about other deaths, which can still be inserted. Among the partial data recorded and presented by the CPT at this time, there is the massacre on the Abacaxis River, which victimized indigenous and riverside people. On August 7, an indigenous person was killed, and two days later, on the 9th, three riverine people were murdered. The conflict would have started on July 24, after the executive secretary of the Social Promotion Fund of the Government of Amazonas, Saulo Moysés Rezende Costa, together with a group of people, entered the area of the Abacaxis River to do sport fishing, without environmental license and disrespecting social isolation due to the pandemic. The territory, invaded by the group, is claimed by the Maraguá indigenous people. Sport fishing and tourism in the area require the issuance of an environmental license. In this conflict the secretary ended up wounded in the arm.

The government criminalizes while the judiciary punishes and is silent

2020 was a year full of attacks against the popular struggle and the territories of rural peoples. Various eviction threats and evictions have intimidated communities. One of the most striking evictions was that of the Quilombo Campo Grande camp, in the south of Minas Gerais. This quilombo stands for history as the longest of the 21st century in Brazil. An operation scheduled to begin and end on the morning of August 12 has become a saga that left profound marks on the social struggles of the state of Minas Gerais. For 56 hours, landless families peacefully resisted the pressure of the Military Police, day and night, in the middle of a road, under the strong sun and the cold of the morning, breathing dust and being threatened.

The Judiciary, which could serve as a barrier to the omissive acts of public authorities, does not do so. The federal government's treatment of land reform is an example. Since last year, the Institute of Colonization and Agrarian Reform (Incra) has paralyzed the processes of expropriation of properties for the purpose of agrarian reform. In addition, Incra dropped administrative expropriation proceedings that were already underway and also called for the suspension of other legal proceedings. According to data sent by the municipality to the National Human Rights Council (CNDH), more than 400 processes are at a standstill, some of which were in the final stage, just waiting for the process of validation of possession.**

On December 9, popular movements, rural entities and political parties filed an Arguition of Non-Compliance with Fundamental Precept (ADPF) with the Superior Federal Court (STF), so that serious disrespect for the fundamental precepts of the Brazilian Constitution are recognized and resolved. , practiced by federal agencies of the State, resulting from the paralysis of agrarian reform and the non-destination of federal public lands for this purpose. Like the constitutionality control actions, the ADPF aims at the prevalence of constitutional rigidity and legal certainty.

Even in a health emergency, conflicts over water remain

According to the CPT Documentation Center, in partial data for 2020, 189 water conflicts were registered involving 34,525 families across Brazil. Throughout 2019, 489 conflicts affected 69,793 families.

Despite the drop in the total number of occurrences, we highlight the Midwest region, which, even in partial data, surpassed the entire year of 2019 with 21 occurrences of water conflicts and 2,836 affected families. While in the previous year there were 13 conflicts in the region, reaching 616 families, the number of families impacted in the Midwest by conflicts over water in 2020 more than quadrupled. In addition, of the 21 recorded occurrences, 15 were against indigenous people, involving 2,449 families, which corresponds to 86% of families impacted by these conflicts in the region.

In the total number of conflicts over water in Brazil, we observed that the most impacted category was that of riverside peoples: 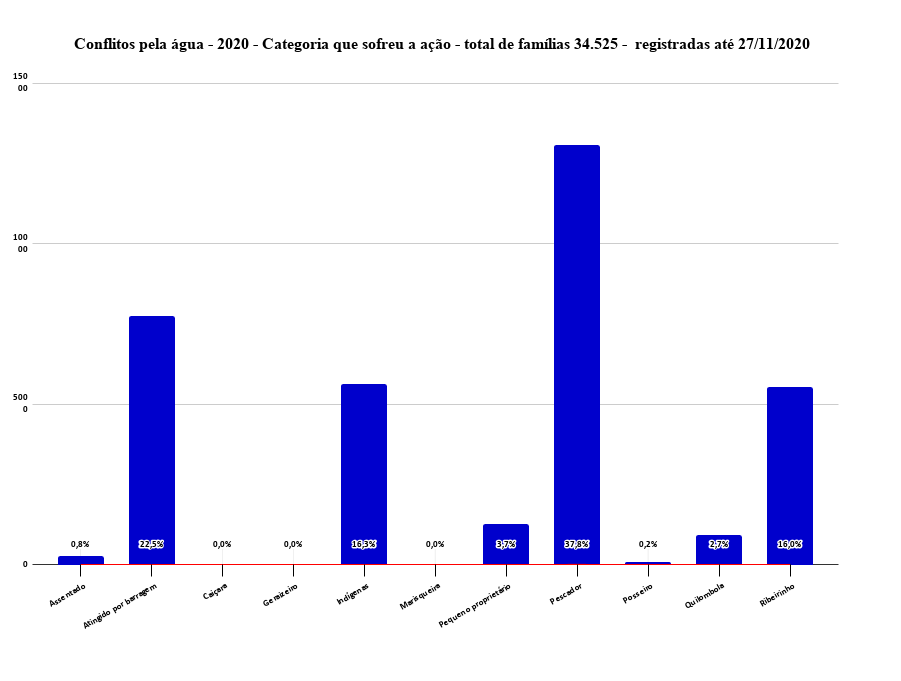 Most of the registered water conflicts were caused by international mining companies, as shown in the following chart: 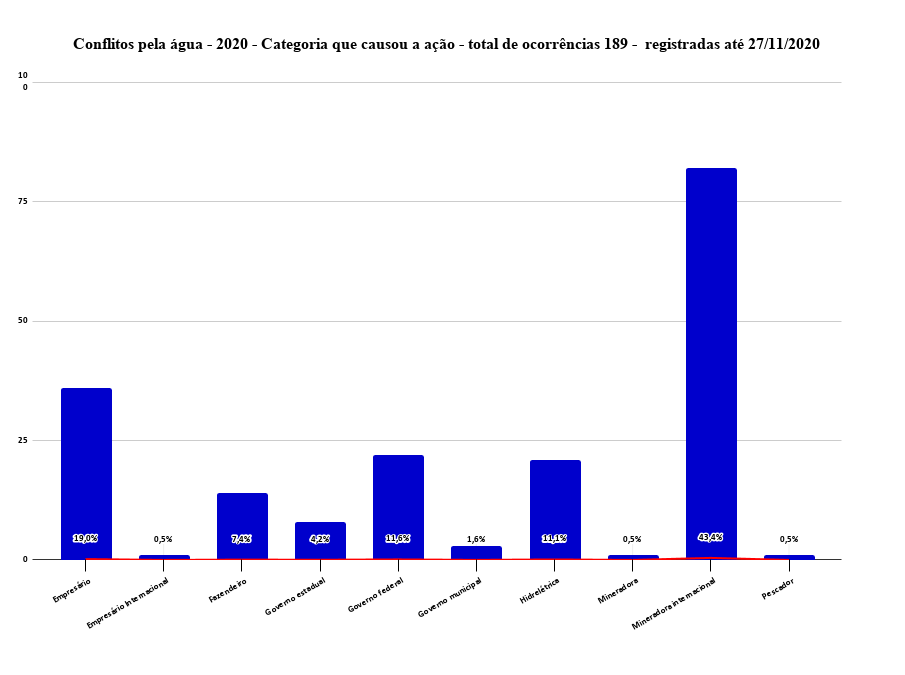 43.4% of water conflicts in 2020 were caused by international mining companies. Five years ago, completed in November of this year, we were witnessing the collapse of the Fundão dam, in Mariana, Minas Gerais, owned by the company Samarco. The dam, which contained 43.8 million cubic meters of ore tailings, killed 19 people and left at least 1.9 million people affected along the Rio Doce basin, from Minas Gerais to the coast of Espírito Santo. In Brumadinho, in 2019, the B1 Dam of the Córrego do Feijão mine, owned by the mining company Vale, had the capacity to store 12 million cubic meters of tailings and also broke down, burying 270 people (11 are still missing).

Even with the successive tragedies, and with the consent of the government, mining projects continue to expand nationwide. A dam that is designed to have a capacity to support 845 million cubic meters of tailings and that will impact several communities between northern Minas Gerais and southern Bahia, makes up the Block 8 Project of Sul Americana de Metais (SAM), a company with Chinese capital. Currently the project tries, at all costs, to be licensed. This would be the second largest mining tailings dam in the world, and could generate 1.5 billion tons of tailings in just 18 years, the time of its useful life.

If the pandemic is destroying populations around the world with its deadly power, compared to traditional peoples it shows an even more devastating impact. According to the Coordination of the National Articulation of Black Rural Quilombola Communities (CONAQ), until 11/11/2020, 4,635 quilombolas were infected by the virus and 168 lost their lives because of it. In indigenous territories, according to the Articulation of Indigenous Peoples of Brazil (APIB), by the beginning of 11/23/2020, 39,826 indigenous people, out of 161 peoples, were infected by the virus and 880 indigenous people died as a result of it.