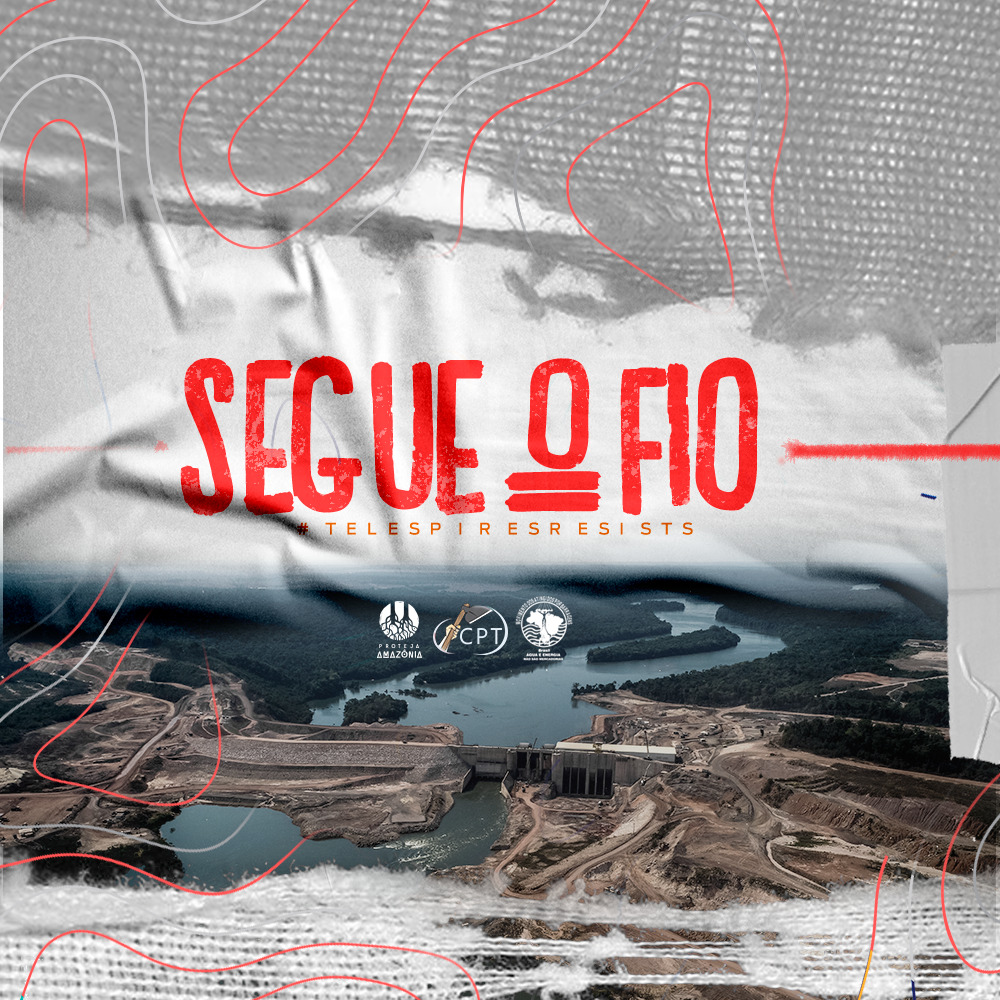 Investments from European multinational companies, in other continents, are made through the creation of sub-companies, a strategy that suppresses the socio-environmental responsibilities of the parent company in relation to frequent violations of human rights and the deterioration of the affected ecosystems.

In this context, the event “DEFENDING TOMORROW: How to ensure European business respects the planet and those who protect it”, organized by Global Witness, will promote a debate-denunciation with representatives of the European Parliament and the European Union, in order to discuss legislation on corporate accountability.

During the activity, which will take place on October 27, will be reported the damage caused to the communities and the environment by the construction of the hydroelectric complex on the Teles Pires River, owned by consortia formed by branches of large public and private companies in Europe, such as: Électricité de France (EDF), Energia de Portugal (EDP) and the Spanish Iberdrola.

In Brazil, several socio-environmental conflicts are results of the action of European companies or the action of European capital invested. According to data from the Comissão Pastoral da Terra (CPT), released in April, as in past years, the Amazon Region concentrates most of the conflicts and violence that occurred in rural areas. In 2019, the region registered 84% of the murders, 27 out of 32. In addition, it was where 73% of assassination attempts took place, 22 out of 30; 79% of those threatened with death, 158 people out of a total of 201. The situation of communities, in the region of the Teles Pires River, is an emblematic case of this context.

Teles Pires is today the river most impacted by hydroelectric plants (HPP) in the Amazon, there are four hydroelectric plants in operation, which generates a huge socio-environmental impact on rural, indigenous, riverside and fishing communities. Moreover, only in the region of the Teles Pires River and throughout the Tapajós basin are 29 large plants and 80 small dams already planned. About one million people, who live in the region, including 10 nations of native peoples, will be directly impacted. These projects aim to guarantee the formation of the most daring waterway in Brazil to expand the flow of grains from the agribusiness sector abroad, the “Teles Pires Tapajós” Waterway.

On the Teles Pires river channel, the French company EDF, with more than 80% of the shares are financed with public funds, controls the Sinop hydroelectric plant. In addition to having destroyed 25 thousand hectares of forest, its water reservoir is one of the ones that most contributes to the emission of greenhouse gases among the entire hydroelectric complex in the region, due to non-compliance with the environmental requirement for complete soil cleaning before the formation of the dam lake. The decomposition of flooded vegetation produces a decrease in oxygen in the water, putting the ichthyofauna's life at risk. Since the beginning of the plant's activities in February 2019 until August 2020, there have been four major fish deaths that exceed 30 tons. In addition, the Sinop dam violates the rights of settlers, fishermen, riverside dwellers and indigenous peoples who need Teles Pires for their survival. More than 200 families lost their land for the installation of the plant and are now struggling to get fair compensation, however the Sinop Business Consortium (CES) does not recognize the land values established through judicial expert opinion.

The Movimento dos Atingidos por Barragens (MAB) placed itself next to the settlers and impacted by the dam in the region, against the project and its damages. Because of this, a prohibitory ban was imposed against the Movement, its leaders, and against the affected settlers themselves, in order to immobilize the peoples' struggle. This legal tool forced the invisibility of the struggle for rights. One of the leaders of MAB, Jefferson Nascimento, who will make the complaint at the event "Defending Tomorrow", was criminalized in this lawsuit, with the clear intention of interrupting the complaints and pressure from the impacted communities.

Coletivo Proteja Amazônia is also dedicated to the situation of the territory, carrying out popular advocacy and communication actions, in addition to monitoring conflicts with the impacted communities, seeking accountability and visibility for the damage caused by these projects.

Inaugurated in 2014, but in full operation since September 2019, HPP Sinop, located 70 kilometers north of the city that gives its name to the plant (Sinop-Mato Grosso), has an installed power generation capacity of 401.9 MW. The reservoir that constitutes the dam occupies an area of approximately 40 thousand hectares, having flooded 25 thousand hectares of Amazon rainforest, in the formation of the lake. Altogether, the Teles Pires complex consists of four large plants already in operation, namely: HPP São Manoel, HPP Teles Pires, HPP Colíder and HPP Sinop.

Built by Electricité de France (EDF), a French company with 83.6% of the shares belonging to the French Government, HPP Sinop must be managed for a period of 35 years - related to the concession to operate the hydroelectric plant - by the Brazilian business consortium Sinop Energia ( Companhia Energética Sinop, SA), with three shareholders: EDF (with 51% of the total), Centrais Elétricas do Norte do Brasil SA (Eletronorte) and Companhia Hidro Elétrica do São Francisco SA (Chesf), with 24.5% each.

The project impacts 214 families from the settlement Gleba Mercedes Settlement Project (PA) Wesley Manoel dos Santos, forcibly displaced from the plots of land where they lived; another 28 families, which were part of other settlements, such as PA 12 de Outubro, were resettled and are still negotiating compensation. Due to changes in the level and flow of the river, the indigenous Munduruku people, who live on the edge of Teles Pires, suffer from the damage caused by these changes, which cause, for example, the death of fish and the proliferation of mosquitoes.

On Tuesday, October 27, the NGO Global Witness holds an event in which the impact of major projects on traditional communities will be discussed. On the occasion, environmentalists, community leaders and European Union policy makers will discuss how proposed legislation on corporate accountability has the power to mitigate the attacks suffered on these communities as they oppose to projects that harm their ways of life.

The event will be held virtually, at 4 pm in Brussels (12 pm Brasília time), in English, with translation into Portuguese, and is open to the public. The participating audience, as well as the Press, can send questions to the moderation of the debate, at the time of registration or during the event, through the link:

DEFENDING TOMORROW: How to ensure European business respects the planet and those who protect it